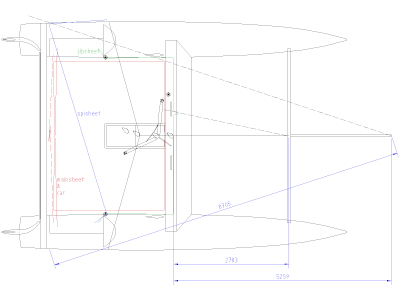 Click here for a high resolution version of the drawing above. It provides an overview of the deck layout of Scarlattikvarten. Details such as jib down-haul and barber-hauls are left out to avoid clutter. Main sheet and main traveller are discussed in detail below. 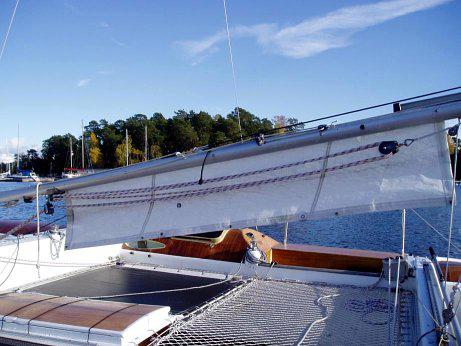 There are some 'musts' when it comes to the main sheet on Scarlattikvarten: 1) The load on the tail must be small enough for me to hold it in one hand while flying a hull. 2) I want to be able to work the sheet from any cockpit. 3) The main sheet may not interfere with the operation of the traveller – not even when fully loaded.

The original main sheet arrangement did only meet the second requirement. Inspired by what I saw on Firebird cats racing in the UK and encouraged by talking to sailmaker Graham Goff I designed the main sheet system shown here.

This main sheet has an 18:1 (minus friction, here is a report on friction in tackles) mechanical advantage. This comes from 6:1 (hanging under the boom) cascaded with 3:1 (between boom and traveller car). The Firebirds had 4:1 cascaded with 4:1 resulting in 16:1. I wanted to have some more sheet to pay out in a crisis so I went for 3:1 between boom and traveller car. If I had gone for 4:1 under the boom the total advantage would have been 12:1 and I thought this to be a little slim. Hence 18:1. If you face higher main sheet loads than I do on Scarlattikvarten you should consider winches rather than an even more powerful winch-less system. Friction is likely to hit you hard and two winches will be lighter than the lines and blocks.

The main sheet has two tails. They are routed forward to the mast and then around the perimeter of the aft 'deck' to each cockpit. This is how I can have one tail in each cockpit and the traveller moves with ease regardless of the load on the sheet. 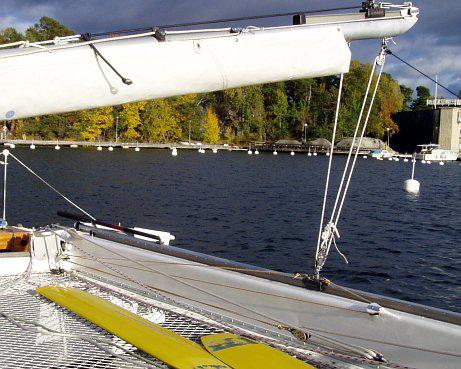 The original traveller control consisted of a 4:1 purchase on each side. The power was adequate and as long as I sailed with crew I saw no reason to change this. When I started to sail a lot on my own this set-up forced me to sometimes rely on luck since I had no-one to send to the other hull to tension or release the other side of the traveller control.

A tackle that pulls the traveller to the centre rather than to each side solves this problem if it has two tails – one for each cockpit. I had already seen such systems on a Danish F28 tri and on some beach cats. In each case the tackle ran forward to the main beam. Although this worked fine for others, I soon realised the deep aft beam of Scarlattikvarten made it hard to implement without creating a substantial obstruction in the middle of the aft trampoline.

The solution was to fold the system and place it parallel with the beam as shown in this photo. The double block to the right at the low edge of the photo is stationary. The other double block moves when I work the tail (the whitish line). This double block is attached to the two thin, yellow lines that connect to each side of the traveller car. In the photo the system is pulled tight, and the traveller car is centred on the beam. The tail is spliced into an endless loop.