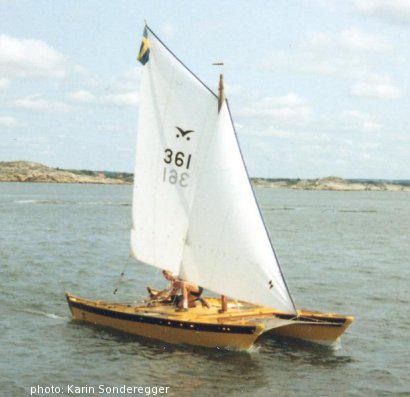 The boat that occupies most of this web is my present boat. Here is a brief description of my first boat. It was a 22-foot cat designed by James Wharram. He called his design Hina.

I bought a set of plans in the mid 1970s and built the boat during a few summer vacations using high quality marine plywood and the wood traditionally used in this part of the world: Oak and fir. In 1979 she was finally launched. Later that year I learned about wood + epoxy for boatbuilding ...

Pi was not a spectacular performer. She was just a little longer than a Tornado but was twice as heavy and carried less sail area. At first she was exactly as designed by James Wharram but after some time I added a pair of daggerboards – a huge improvement. Down-wind joy was boosted by a small asymmetric spinnaker. The power to weight ratio was still poor so she needed a lot of wind to fire on all cylinders.

This is not to say Pi was a bad boat. She was good enough to get me hooked on multihulls. On a windy day we left much bigger monohulls in our wake – even to windward. We also cruised up and down the coast some, camping on the platform using back packer gear.

I sold Pi while building my present boat. The new owner called me later that summer to tell me how happy he was with the boat.